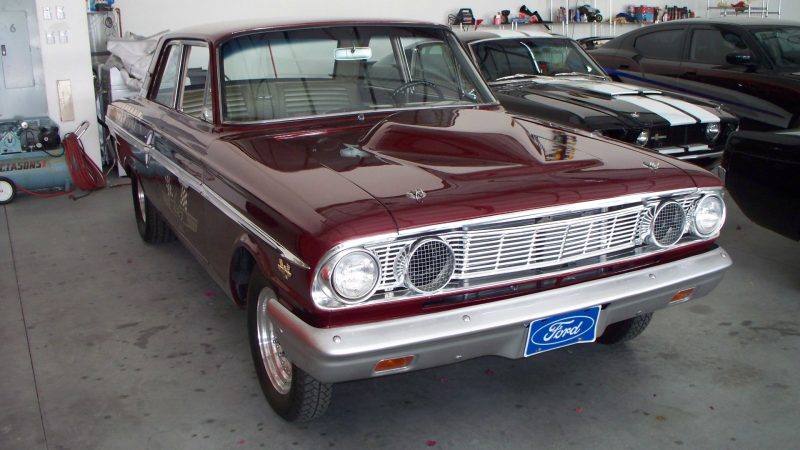 This is a guest article from our resident car geek, Brett Hatfield. You can find more car content (in both written and audio form) on his site, The Driven.

In 1963, Ford had great success in the NHRA (National Hot Rod Association) Super Stock class. They had been running a Ford Galaxie equipped with the potent 427-cubic inch V8 and dual 4-barrel Holley carburetors. It was rated at 425 horsepower and 480 pound feet of torque, but with tuning real output was close to 600 horsepower.

Despite the numerous wins in Super Stock, there was pressure on Ford’s drag racing program.  Chevrolet had the Impala Z-11 with its W-head-based 427 Big Block, MOPAR were working on their own lightweight cars, stuffing them full of the Stage III Max Wedge engines, and there were even rumors of a new Hemi coming from the Chrysler skunk works. Ford couldn’t afford to rest on their laurels.

New Rules, New Car
For the 1964 season, the NHRA introduced rules for the Super Stock class that would allow engine displacement of up to 427 cubic inches in cars weighing no less than 3,200 pounds. Despite their best efforts, Ford had only managed to pare the Galaxie to 3,425 pounds and still be within safety regulations. To remain competitive they would have to get lighter, and that would require a new platform.

Dick Brannan, the head of Ford’s Drag Team knew they had to do something drastic. He ordered ten two-door Fairlanes. All ten were ordered without radios, heaters, and seam sealer. The Fairlane shipping weight was 2,992 pounds. After adding fuel and a driver, it would be right at the NHRA 3,200 pound minimum. All ten Fairlanes were shipped to Dearborn Steel Tubing for modification.

Finding the Right Fit
Dick Brannan wanted to use one Fairlane as a test bed, develop the modifications, then apply those changes to the other nine. The front bench seat was swapped for bucket seats from a Ford Econoline van. All the glass save for the windshield was replaced with fixed Plexiglas. As the side windows were no longer operable, the window cranks and mechanisms were also removed.

New stripped door panels without armrests replaced the stock units. The passenger side wiper and sun visor were eliminated. Carpet was replaced with a black rubber mat. The 427-cubic inch engine needed more air, so the high beam headlights were eliminated, and the empty sockets were converted to mesh-covered air intakes. This may seem extreme, but Brannan was just getting started.

The steel front fenders, doors, and hood were removed in favor of fiberglass versions. Steel bumpers were changed out for fiberglass (the NHRA would eventually say no to the fiberglass bumpers, and they were swapped for aluminum units). The hood had a considerable bulge to accommodate the “high-riser” 427 FE engine. The battery was moved to the trunk to make room for the new mill. The spring towers had to be cut back. The headers ran through everything including the suspension.

Test Drive
The first test run was eye-opening. Dick Brannan said, “Vern and I went out on our first run, and it sucked out the rear window, which went 50 feet into the air.” That run produced a 12.26-second elapsed time at 122 mph.

It took three months of nightly testing and daily modification to develop the changes for the other nine cars. Even with the monster 427 installed, the Fairlanes tipped the scales just under 3,200 pounds.

While the first two cars remained in the hands of the Stock Vehicle Department, Ford delivered the remaining eight to the Drag Team members. A couple weeks later, an eleventh car with an automatic transmission was delivered to another racer. Ford thought that the original ten cars would be enough to satisfy NHRA homologation minimums, but the NHRA demanded that 100 copies of the newly christened Fairlane Thunderbolt be built. There would be fifty with automatic transmissions and fifty with manuals, all built before the February 1964 NHRA Winternationals, when Brannan and Ford planned to introduce the Thunderbolts. Everyone involved in the project was quite busy for a couple of months.

The 1965 NHRA season would see significant competition in the form of altered-wheelbase funny cars. At the same time, the new model year of Fairlane would increase in weight. That combined with the introduction of the lighter Mustang and Falcon spelled doom for the Thunderbolt. Total production numbered only 100 units in 1964.

Because the Thunderbolt was intended to be a racing car, Ford riveted a metal plate to the inside of the glovebox door with a disclaimer. The plate reads: This vehicle has been built specially as a lightweight competitive car and includes certain fiberglass and aluminum components. Because of the specialized purpose for which this car has been built and in order to achieve maximum weight reduction, normal quality standards of the Ford Motor Company in terms of exterior panel fit and surface appearance are not met on this vehicle. This information is included on this vehicle to assure that all customers who purchase this car are aware of the deviation from the regular high appearance quality standards of the Ford Motor Company.

Do you have a car you’d like us to write about? Let us know in the comments!