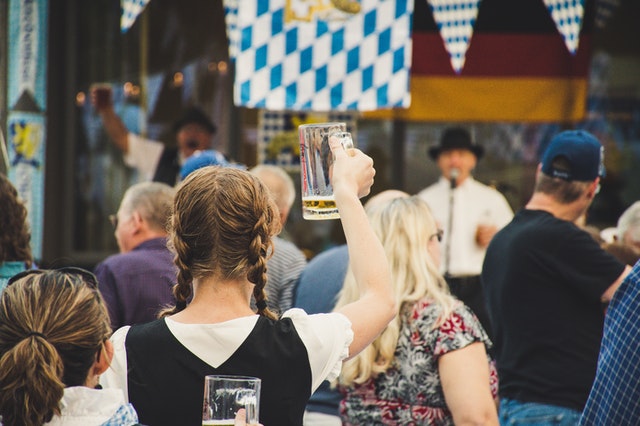 It’s October, which means it’s a perfect time to celebrate with some beer and sausage.  While Munich has the largest celebration of the holiday worldwide, America’s no slouch when it comes to putting on a party this time of year.  In fact, there are many amazing Oktoberfest events worth checking out that don’t require an international flight.

How Did It Start?

In Germany Octoberfest actually starts in September.  The festivities traditionally ran in the two weeks leading up to the first Sunday in October, but after Germany was reunified, the schedule was modified such that if the first Sunday in October falls on the 1st or the 2nd, the festival will run until October 3rd, which is German Unity Day (commemorating the unifying of West and East Germany).

Way back in 1810 Crown Prince Ludwig (who would later become King Ludwig I) married Prince Therese of Saxe-Hildburghausen.  The citizens of Munich were invited to attend on fields in front of the city gates.  The fields were named Theresienwiese in honor of the bride (“Theresa’s Meadow”) and have been called that ever since.  The party was so good that it became an annual event.

Texas had a lot of German immigrants, so perhaps it’s not that surprising that they’ve got plenty of Oktoberfest celebrations.

This town is in the heart of Texas Hill country, an area that’s known for a little-spoken (but still living) dialect of German called “Texas German.”  There’s a famous chicken dance on offer at the Fredericksburg Oktoberfest, as well as a 42 Tournament, which involves a domino game invented in Texas.  This event happens the first weekend of October.

“Sprechen sie fun?” is the motto of Wurstfest, a 10-day extravaganza in New Braunfels, not far from Fredericksburg.  100,000 visitors descend on the town for this event, which runs November 5-14 this year.

For those who live closer to the DFW Metroplex and want to stay closer to home, both Fort Worth and Addison have Oktoberfests: the Addison one even features a yodeling contest and a German spelling bee!

If you are willing to travel to get to a big celebration, you could do worse than Oktoberfest Zinzinnati, which manages to pack in half a million visitors into a four day celebration.  It’s not just America’s biggest Oktoberfest, it’s second in the world only to Munich’s!

The event kicks off with a “Running of the Wieners” which are races between dachshunds wearing wiener costumes.  They also have a Gemuetlichkeit (“Goodwill”) Games featuring beer barrel rolls and beer stein races, among other fun times.  They also claim the title of “world’s largest chicken dance” which they captured in 1994 with almost 50,000 people doing the dance at the same time.  Dancing not your thing?  They’ve got a brat-eating championship too.

If you want to feel like you’re in Bavaria, you might want to head up to Leavenworth, Washington, which looks like a Bavarian village set in the mountains 365 days a year, but gets really dressed up for three weekends of celebration.

A lot of these events are so popular that booking accommodations a year in advance isn’t uncommon, even during strange pandemic times.  Whether you attend one of these this year or in the future, you’ll have a great time: who needs an excuse to eat sausage and drink beer anyway?

Have you been to any of the events we mentioned?  One we didn’t?  Let us know in the comments below.