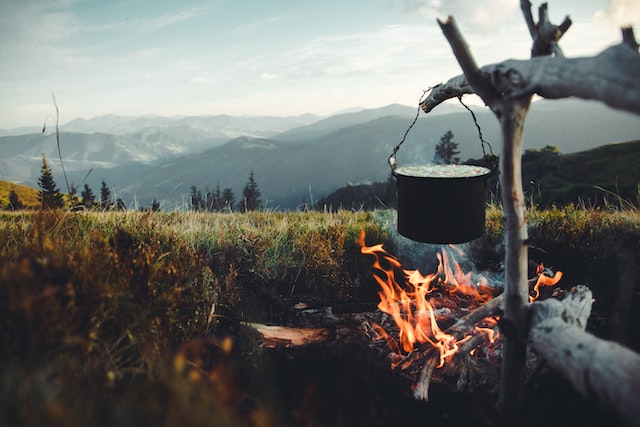 As the weather cools we might be thinking more about comfort foods, particularly those that can be made low and slow in something like a traditional Dutch Oven. Dutch Ovens are great ways to enjoy the outdoors, get the family involved in a meal, and eat delicious food.

While there are several stories as to why these pots are called Dutch, the common thread in all of those stories involve people running into the Dutch using this method to cook and it spreading to others who liked the results. Despite advances in technology Dutch Ovens are still considered a functional way to cook and in answer to modern technology, it’s a way to cook that still works when the power goes out.

It’s also the Gents’ answer to spouses going on and on about air fryers or instant pots. This isn’t something done in 30-60 minutes. It’s something that takes time and care.

We like cast iron Dutch Ovens, which will have the same seasoning, cleaning, and maintenance routines of any other cast-irons you already have. But a lot of people like enamel ones too. See which one makes the most sense for how you’ll be using it most often.

You might get more than one as they easily stack, allowing you to cook more than one dish at a time. To give you some sense of sizes:

As fare as briquettes go, don’t wait until they are completely gray: this isn’t for bbq. If they are gray on the sides they are ready to go. A good rule of thumb is that you need twice as many briquettes as the diameter of the lid, so a 12-inch oven needs 24 briquettes. Take half that number and add 2-3 to get the number of briquettes you should put on the top, and put the rest on the bottom.

You can get the whole family involved when Dutch Oven cooking. People can be tasked with doing the prep, like cutting up ingredients or building the brick stack or even getting the briquettes ready to go. You’re also not limited to what you can cook. While favorites like short ribs or gumbo or a mountain man breakfast are easy winners, you can also make bread, pizza, or desserts in them.

They keep heat very well so they don’t need as much energy input and even when your food is done cooking, it’ll keep the heat (as well as moisture and flavor) for a long time.

These ovens are durable and as long as you treat them right they can be passed down to your children or their children.

You’ll also get a free side workout in lifting and moving the oven while you cook!

Finally, maybe the best reason for a Gent to get cooking with a Dutch Oven? Adding one more tried-and-true tool to his cooking toolbox for himself and his loved ones.