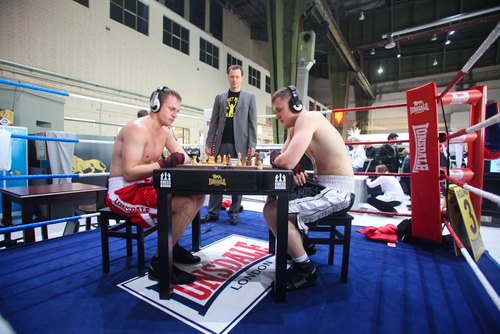 Chess has always been on the edges of pop culture. Even though it’s beloved throughout the world, and has all the strategy you could ever want in a game, it still isn’t on the radar of most Gents.

But what if you add boxing to it?

How Did It Start?

In Bilal’s comic, opponents had to box an entire match first, then play chess. Rubingh found this impractical and instead created the alternating version in use today.

But clearly something was in the air, as before Rubingh staged events in the early 1990s, some version of chess boxing was already happening in London in the late 1970s. Two brothers were in a habit of playing a round of chess with each other after a training session at their club.

There are no score requirements if you just want to put together your own informal (chess) fight club. Just remember the rules of fight club! But if you want to play in a sanctioned international event, you will need a minimum Elo rating of 1600 in chess (nothing to sneeze at) and a record of at least 50 amateur bouts fought in boxing or another martial art.

How Does It Work?

Opponents play 11 alternating rounds of blitz chess and boxing until one wins by checkmate or knockout. Each round lasts three minutes, followed by a one-minute break. The chess timing is nine minutes in total for the entire match, and that time is tracked through chess clocks that run down the longer an opponent takes to make a move (they stop every time you make a move, hence starting your opponent’s clock). If you run out of time, you can lose, and if you draw in the chess round, then the only way to win is by boxing decision. Here are some other typical ways a match can end:

Events are held in a standard boxing ring using amateur boxing equipment and rules. The chess round is also played in the ring with the table, board, and seating moved in and out of the ring for each round.

This chess variant is really popular in the UK, India, Finland, and Russia.

Why Is It Hard?

If you’ve ever watched chess played at a tournament, the room is hushed and people are using all their brainpower and concentration to make the right moves.

If you’ve ever watched a boxing match, you know it’s the opposite of tournament chess: it’s loud, you’re making decisions quickly, without too much time to consider a long strategy, and you get very physically tired towards the end of a match.

Combining these two disciplines has an allure for those who want to demonstrate “sound body, sound mind.” Switching between the old-school force and tactics of boxing and the sophisticated theory of chess is not at all a straightforward feat, and very often can lead to “jaffers” in the chess game. A gaffer is a Cockney slang term for “mistake.” It’s hard enough making moves when you haven’t been taking punches to the face, right?