Why the Rise of Vegan “Meat”? 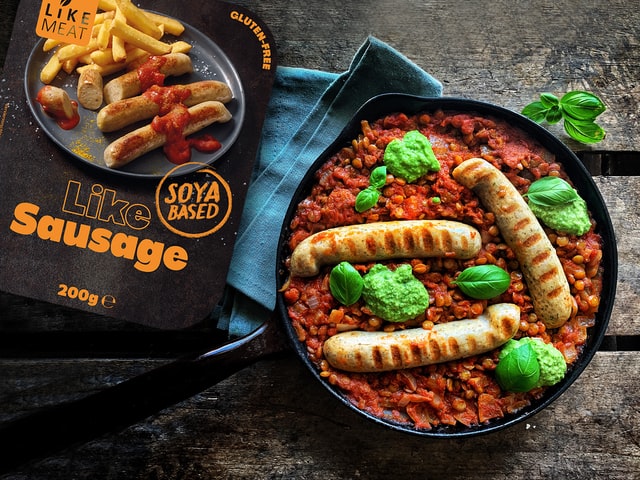 As any Gent might know, there’s rarely such a thing as a secret vegan.  While some may have religious or particular medical reasons for vegan diets, many vegans opt for that diet for ideological reasons (and are happy to tell you all about them) and they have recently managed to convince some well-funded companies to come along for the ride.  Given how much we here at the Gents Blog write about bbq, smoking, and brisket, we won’t be giving any vegan recipes out in the near future, but we do think it’s important to better understand this shift in the global food marketplace.

Some of the Contenders

We can’t go through all the various products that are out there, but we will take a small sample of what’s on offer in the frozen section of your local market.

These “sausages” are made from peas, fava beans, and rice which are emulsified with potato starch and apple fiber to give you the texture of sausage.  Add in some beet juice for color and algae-derived casing to give you the sounds of sizzle when you grill and you have a product that has 43% less fat and 2 more grams of protein than its meat equivalent.

The 19 grams of protein in each of these patties is 100% derived from soy.  They also use a genetically-engineered yeast to create heme, which is a crimson-colored molecule that makes these patties “bleed.”

For those who don’t know seitan, it’s wheat gluten flour mixed with water.  That comprises the majority of this ribeye in structure, with vegan “fat” mixed in for the “marbling.”  Flavor comes from tomato paste, soy, worcestershire sauce, and dijon mustard.

While those who are committed carnivores may laugh at some of these descriptions, it’s important to realize that the companies selling these products aren’t looking to convert people to vegetarianism or veganism.  They just want to be one of the additional choices you consider whether you’re buying your food at a market or at a restaurant.

In fact, two of these companies are already in strong positions in the frozen section of markets, with Beyond Meat taking up roughly 20% and Impossible with just under 10%.  Those percentages also indicate the respective companies strengths: Beyond is going after your fridge, while Impossible is going after your restaurant or takeout meals.  Impossible now boasts partnerships with Qdoba, Burger King, White Castle, and Red Robin.

Given that the Impossible Whopper can be served with bacon bits, it’s clear that these companies are not making a play for ideology, but for the money on offer by just taking fractions of the enormous beef, chicken, and pork markets.  That’s not such an impossible strategy, considering some of the various forces currently at play.

If you’re wondering why so much is invested into making these products look like “meat,” down to the bleeding and sizzling, it’s based in psychology.  These companies want people to change their diets without changing their eating habits.  The hope is that once that hurdle is jumped, a “health halo” will lead to even more consumption of their products.

Recent world events have led to price increases for traditional meat and Beyond and Impossible have not missed the opportunity to offer major discounts on their products to incentivize people to simply try their products when a price disparity is so large.

It’s probably not that surprising that the founders of some of these ventures, like Ethan Brown of Beyond Meat, support a meat tax, turning your everyday burger into the equivalent of alcohol or tobacco, making a political link between meat consumption and man-made climate change.

Whether large numbers of people will opt for a seitan ribeye over the real thing remains to be seen, but as we already noted, the end game for these brands isn’t converting you to vegetarianism or veganism, but rather just taking a bit of the market for themselves, and over the last few years they’ve done a remarkable job of doing precisely that.

Have you tried any of these non-meat meats?  What did you think?  Let us know in the comments below.