The Evolution of the Safety Razor 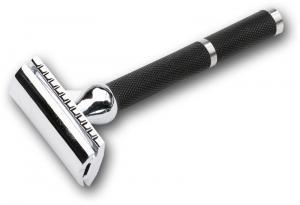 March 14, 2011
As we’ve said before, the safety razor or double-edge razor is one of the best shaving tools you can buy to get a close, smooth shave. But the safety razor isn’t a tremendously new piece of technology.

The Beginning of the Modern Safety Razor

Before safety razors, straight razors were the common shaving tool. Of course, straight razors don’t have any safeguard against deep cuts. The idea of creating a safer razor, with blade guards, was piloted by Jean-Jaques Perret in 1770, but it wasn’t until 1888 that the development of the true, modern safety razor began. That year, the first American patent for a safety razor with a protective wire guard was given to the Kampfe brothers.

Soon enough, other manufacturers, like Gillette, were also developing and patenting designs for safety razors, and this new way of shaving was born.

All About the Blades

Safety razor blades, in their earliest incarnation, were not disposable and had to be sharpened frequently. But, the addition of disposable razor blades by King Gillette at the turn of the century changed the game and made the safety razor even easier to use. Gillette, of course, built an entire shaving empire on the disposability of blades with his loss-leader strategy (give away the razor, and profit on the replacement blades).

Early safety razor heads were the classic “sandwich” type; they must be unscrewed from the handle to insert a new blade. The process of changing blades was made much easier by the introduction of the Twist-to-Open (TTO) design. With a TTO razor, the butterfly doors of the razor’s head are easily opened and closed with a quick twist of the mechanism at the bottom of the handle.

The basic design and function of the safety razor has changed little since the mid-20th century, but after the introduction of cartridge and disposable razors in the 1970s, the safety razor fell out of favor with most men. However, more recently, the safety razor is seeing a revival among men who are looking for not only a better shave, but also a more economic way to shave. With a safety razor, the primary investment is the razor itself; replacement blades are inexpensive. It’s also better for the environment, since the steel blades can be recycled.

Are you a fan of the safety razor for your own daily shave? If not, perhaps you should give it a try! The Gents Place has a great selection of safety razors and accessories.