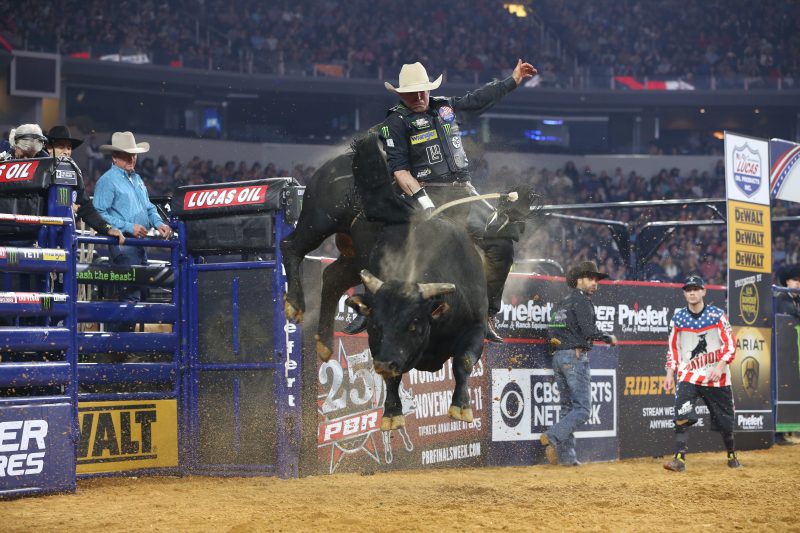 In 1992 a group of 20 riders broke away from the traditional rodeo scene to form Professional Bull Riders (PBR).  They each put in $1000 and took a risk that audiences would like a new and exciting slant to the sport they loved.  Today, PBR operates in five countries and fills arenas in the US from the Staples Center in LA to Madison Square Garden in NYC.  And next month, despite the challenges of Covid, they will be hosting their World Championships in Arlington, Texas, at AT&T Stadium.

In a Normal Year…

PBR, also known as “America’s Original Extreme Sport,” normally offers 200 events over a 27 week timespan each year, in which 700 riders from around the world compete, including riders from Australia and Brazil.  There are different competitions which house these events, including the premier Unleash the Beast series, the Pendleton Whisky Velocity Tour, and the Touring Pro Division, along with other international circuit events.  All these competitions offer titles and points.  Those points tally up towards the World Championship.

The World Finals has traditionally been held in Las Vegas at T-Mobile Arena.  It features 35 of the best riders in a multi-day head to head competition.  The winner wins $300,000 and the 560 points on offer from the event.  While it might seem natural that the winner of the World Finals event would be the same rider as the World Champion, this has actually very seldom been the case.  The most recent rider to accomplish the feat was Jess Lockwood in 2019.

The rider with the most points from the full season after the World Finals becomes the PBR World Champion, which comes with a $1M prize, but probably just as important, the bragging rights that come with the World Champion Golden Buckle.

By late March 2020, PBR had managed to host 10 events before widespread lockdowns caused a temporary halt to the season.  But by late April, the group of gritty and determined cowboys had pioneered protocols that have been requested by more than 15 different leagues: frequent medical tests, social distancing guidelines, “pod seating” in the arena, cashless transactions, and mobile ticketing.  This allowed them to become the first sport to put on events in Guthrie, Oklahoma in late April, followed by the first to welcome fans back into the arena in July.  The momentum continued to add up to 16 total event weekends since the lockdowns first began in parts of the US, ten with fans in attendance with the new safety protocols in place.

Nevada’s Covid situation did not allow for the World Finals to be held in its traditional home.  Instead, this year’s World Finals will be in Texas.  There should be plenty of new fans watching, as PBR recently finished second only to the NFL against all sports on several Sundays.  PBR TV viewership is up 8%, while other sports are down, some at historic lows.

When asked about how and why PBR kept muscling through the crisis, Commissioner Sean Gleason responded:

“It was very important to us to get back to work.  From the onset of the virus, we have taken this health crisis very seriously, learning all we could and developing an industry-leading plan to hold events safely and responsibly.  We are very proud to first lead the return of live sports, and then to host fans in the stands, and we are even prouder to give the riders, stock contractors and our crew, who depend on PBR events to earn a living, a chance to get back to business.”

This can-do attitude resonated with us at The Gents Place, as we have very much done all we can to keep our team moving forward and serving our members and community as best we can, focused on what we can do, instead of what we can’t.

Still Up For Grabs

The battle for World Champion is a still-close race between two Brazilians, Jose Vitor Leme and Joao Ricardo Vieira.  Leme, who was a soccer star in Brazil, is in the midst of a fantastic season and has finished runner-up to the World Champion in 2018 and 2019.  But veteran rider Vieira is known as the “King of AT&T Stadium” and has put up giant scores and won over $800,000 there.  It might feel almost like a home game for him.

Rebel throwback cowboy J.B. Mauney, a two-time world champion (2013, 2015), is also on fire after healing from a host of injuries, rocketing from 98 in the World to No. 29. Mauney, along with former 2016 Champion Cooper Davis, who spent four months sidelined with a fractured neck then came back very strong to rise to world No. 6, could well take the $300,000 event check.

If you’d like to join in the festivities Nov 12-15, PBR has been kind enough to grant us a special 20% off the first two nights on P5-P7 tickets.  Simply use code GENTS when checking out.  It’s a great time out and a way to reclaim a bit of normalcy in a year that has been anything but.

Have you been to a PBR event before?  Let us know about it in the comments below.