Read like a Gent: Extreme Ownership, by Jocko Willink 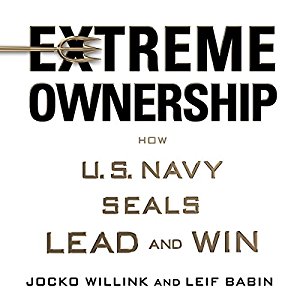 While you may not have read his first book, you have probably heard of Jocko Willink.  He’s graced the cover of Success magazine and been asked to speak and consult around the world.  He also launched his own podcast after being pushed to do so by Tim Ferriss, who conducted two different interviews with Jocko on The Tim Ferriss Show.  But all this demand and popularity stems from the authorship of the book Extreme Ownership: How US Navy SEALs Lead and Win.

In the book, Jocko describes a friendly fire incident in which one of his SEALs accidentally killed a member of the Iraqi military.  The operation was a perfect storm of mistakes that led to a death – people went to locations at the wrong times, moved to the wrong position altogether, etc.  Jocko was ordered to shut down operations, return to base, and be prepared to brief, knowing that the higher-ups would want someone’s head to roll for this.  As Jocko prepared for the briefing, even as late as 20 minutes before he was scheduled to present, he couldn’t pinpoint a single point of failure.  Then, as he stepped further back from the situation, he had a moment of clarity: he was that single point of failure.  He was the commander of the op.  If something went wrong, all roads eventually led back to him and an unsuccessful communication of commander’s intent.

And that’s exactly what Jocko said in the briefing.  He claimed full responsibility for what happened and he promised that something like that would never happen again.  Two great things happened as a result.  His superior officers were both surprised and impressed.  Their level of trust in Jocko increased because they knew he would take responsibility if something went wrong.  And his men had a “Spartacus moment.”  At a point in the old Kirk Douglas film he stands up to identify himself as Spartacus, knowing that it carried a death sentence.  Instead, one by one his men stood up and said “I am Spartacus.”  In the same way, because of Jocko’s willingness to look at himself as the point of failure, the men were each willing to look at their own faults in the operation and say, “No, boss, I should have been more clear about the time to cross the line of departure, etc.”

Thus, extreme ownership was born: “an attitude of not ever making excuses or blaming others: when problems arise you take ownership and solve it.” Such an attitude, held by those in leadership positions, inevitably filters down to subordinates (whether in the military or civilian world) and they begin imitating it. Because no one wants to be the person who blames others, blaming a subordinate actually reflects poorly on you. It means you have failed in leading them.

As Gents, we can apply extreme ownership everywhere – in our workplaces, businesses, families, and personal relationships.  It’s truly an attitude that lifts everyone up.

Do you have a favorite book on leadership that you think should be featured on our blog?  Mention it in the comments below.