Read Like a Gent: The Richest Man in Babylon, by George S. Clason 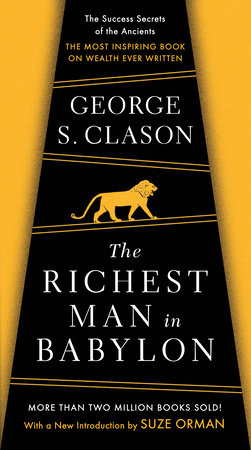 This is a guest post from David Ford, who last wrote for us on SHTF scenarios.

One of the first books on finance I ever read was the 1926 book The Richest Man in Babylon by George S. Clason. It is allegedly based on the historical writings of a man named Bansir, who lived over 8,000 years ago in the city of Babylon. The people who lived there at that time were the Sumerians, a middle bronze-aged people. They were well-educated and enlightened people known for mathematics, astronomy, finance and best known as agricultural people who created advanced irrigation systems and canals to control the Euphrates and Tigris Rivers.

Scholars believe that the Sumerians were the first to develop a written language called “Cuneiform” and they would record the events and activities of the day by carving on a moist clay tablet which was then baked into a hard tile about an inch thick and six inches wide by eight inches in length.

During the 20th century, many artifacts were uncovered by archeologists, including these clay tablets, representing the “recorded” history of the time. One such set of tablets told of a wealthy man named Bansir. These tablets gave an account of his lifelong search for the achievement of wealth by following the teachings of a man named Arkad, who was the richest man in all of Babylon.

The writings tell the story of Bansir and his desire to be wealthy. So he sought out Arkad to convince him to share the secrets of wealth. After a time, Arkad shared a series of five laws with Bansir. Arkad explained that these were the only rules necessary to acquire, grow, and preserve wealth. Arkad told Bansir to follow them precisely if he wanted to achieve financial success.

Whether the story of Bansir is true or not, the lessons and wisdom learned from these laws are still useful in today’s investment environment.

Gold cometh gladly and in increasing quantity to any man who will put by not less than one-tenth of his earnings to create an estate for his future and his family.

Gold laboreth diligently and contently for the wise owner who finds profitable employment, multiplying even as the flocks of the field.

The keyword here is “profitable.” For your money to be profitable, you must use an approach that balances the expectation of return with the necessity and reality of risk.

Gold clingeth to the protection of the cautious owner who invests it under the advice of men wise in its handling.

Getting good advice will have significant value to your bottom line. You don’t get advice on what cut of meat to grill from your florist, do you? Check with a fiduciary for advice and about asset management. A fiduciary is a person who holds a legal and ethical relationship of trust with one or more other parties.

Gold slippeth away from the man who invests it in businesses, or purposes with which he is not familiar, or those not approved by those skilled in its keep.

Gold flees the man who would force it to impossible earnings, or who followeth the alluring advice of tricksters and schemers, or who trusts it to his own inexperience and romantic desires in investment.

The message of these last two laws will seem profound looking in the rearview mirror of the previous two decades, which started with the idea that tech and telecommunications stocks that were the key to riches without risk. People generally abandoned rational thought and understanding when they followed the tainted and sometimes completely bogus recommendations of the stock brokerage industry’s analysts and found that their “gold” has “slippeth away.”

Then there was the housing bubble of 2008. For many, what slippeth away was more than just money; it was a lifestyle that they had planned on living when they retired. For others, the result was fear which caused them to abandon investing with honest individuals and companies. Some first-time investors left the field and never returned. The impact of positive investing successfully will never be felt by them or their families.

All of this could have been avoided by learning and living the five laws taught by a man who understood the key to successful investing is understanding the benefits of prudent decision making.

Do you like one of these laws more than the others? Share with us in the comments.

337300cookie-checkRead Like a Gent: The Richest Man in Babylon, by George S. Clasonyes