Read Like a Gent: The Endurance: Shackleton’s Legendary Antarctic Expedition, by Caroline Alexander 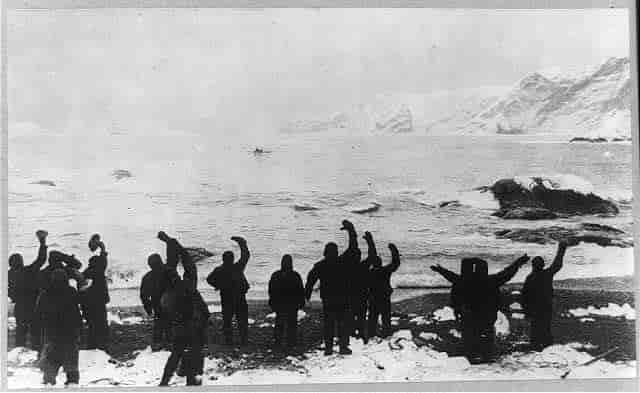 In previous articles we’ve talked about creating your own band of brothers, not just for accountability but for deeper friendships.  While many associate the concept of a band of brothers with wartime, sometimes you can form those bonds of friendship with fellow men in unexpected situations which had the most peaceful of origins.  The story of men who band together to survive in one of the most remote places on earth is at the heart of Caroline Alexander’s book, The Endurance.

In August 1914, just days before the outbreak of the first World War, Ernest Shackleton, already a legendary explorer, took a crew of 27 to the South Atlantic.  He was chasing the “moon landing” of his generation: crossing the Antarctic continent on foot.  Shackleton had been south on two previous occasions, and by 1914, the Norwegians, led by Roald Amundsen, had reached the South Pole.  Shackleton knew that others were planning for an Antarctic crossing, but he managed to get the British government to give some financial backing to his plans.  He also did some private fundraising and sold photographic and storytelling rights in advance.  Despite some last minute questions about whether they could, indeed, go off on a peacetime mission just as war was about to break out, they were finally allowed to leave for the South Atlantic.

Shackleton planned to use two ships and two groups.  The first would travel through the Weddell Sea to Vahsel Bay, where fourteen men would land.  Of those, six men, 69 dogs, and two motor sledges would join Shackleton on the almost 2,000 mile journey to the Ross Sea.  The crew that remained behind would carry on scientific research.  The other team would land at McMurdo Sound on the other side of the continent.  Here they would lay depots for the oncoming party as well as meet them and assist them home.  They too would be carrying on scientific research in the meantime.

Needless to say, things did not go as planned for either the Ross or Weddell Sea cohorts.  Shackleton’s story, that of the Weddell Sea group, occupies the bulk of Caroline Alexander’s narrative.  Alexander manages to draw on original sources, including Shackleton’s own retelling to weave together an exciting narrative, even for those of us who already know how it will end.  In this same book, which was published some years ago in conjunction with a major exhibition of the famous journey of the Endurance, are the amazing photos of Frank Hurley.

Hurley was the official photographer of the expedition, and his images miraculously survived for months on the ice, a week on an open boat, and months buried underground before rescue.  Some of the most well-known shots of the journey, after Hurley had to leave his professional equipment behind, were captured with a pocket camera and three rolls of Kodak film.

Like so many episodes in history, we know about the story of the Endurance not because they succeeded, but because they failed in their initial mission.  The ice trapped, and then ultimately destroyed their ship, and in an era before GPS and satellite phones they were stranded and left to fend for themselves for almost twenty months.  To make matters worse, their home country was embroiled in what was then the most destructive war in human history: reinforcements were not coming.

Gents should read this book to be inspired by men who have come before us and have conquered great odds to survive, to see how to survive with men who you had never met prior to this trip, and remember what we so often may forget, that the journeys we take in life so often define us that the destinations fade into the background.

Do you know the story of the Endurance?  What impressed you most about it?  Share in the comments below.

316100cookie-checkRead Like a Gent: The Endurance: Shackleton’s Legendary Antarctic Expedition, by Caroline Alexanderyes