Podcasts for Gents: Side Hustle School and Built to Sell 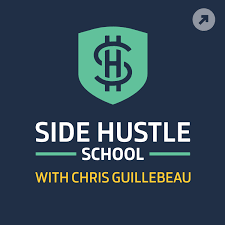 It’s hard to believe that with all the talk of “side hustles” that there was no book by that title before Chris Guillebeau recently wrote Side Hustle.  In a related play, John Warrilow named a podcast after a book he had written years ago, Built to Sell.  Both of these podcasts feature men who have gone through the process they are chronicling in the stories of others, and are passionate about sharing key lessons for those who want to walk similar paths.

Chris Guillebeau first rose to prominence with his 2010 book The Art of Non-Conformity.  In some ways it was an update of Tim Ferriss’ 2007 Four Hour Work Week, but it other ways, it was just a general challenge issued to those who felt that they wanted something more out of their careers or businesses.  A quote like “The conventional model is still the myth of deferred gratification – spending the most productive years of our lives creating wealth that can only be enjoyed years or decades away in a distant future” was not yet in the popular consciousness.  It would take Shark Tank and a development of the gig economy to make ideas Guillebeau first advocated nearly a decade ago fairly mainstream.

Guillebeau went on to write The $100 Startup as well as Born for This (best read alongside Jeff Goins’ Art of Work), continuing to be fascinated with the idea of building something at a scale you desire, while keeping your day job or primary business.  That’s why it’s not that surprising that he created an entire superstructure around “side hustles.”  His podcast, Side Hustle School, answers the often-false claim of “Well, I couldn’t do that” by chronicling in daily 10-15 minute episodes, people who have started every type of business, for every type of reason, at all levels of income, to the scale that they first set out for, and beyond.  It’s an easy addition to your podcast lineup because it’s not going to require the 30-60 minute commitment that most podcasts demand.

John Warrilow wrote Built to Sell to help business owners get a better handle on what potential buyers of their businesses were focused on: systems that could run without the owner and dependable revenue streams with growth potential.  He told it in a story format and kept it short, much in the style of another book focused on some similar themes, Michael Gerber’s The E-Myth.  While the book came out in 2010, John continued to get so much good feedback that he decided to create a podcast by the same name.

In each episode, typically an hour or less, John interviews a business owner who exited a business at a minimum of $500k all the way to over $1B.  He starts with how the business was conceived and grew, to the decision to sell, to all the maneuvers (and sometimes drama) that comes with letters of intent, due diligence, and final closing.  If you’re interested in how and why people build businesses, it’s helpful to begin at the end, by listening to and understanding sales.  There are plenty of podcasts that interview successful business owners, but very few that get into forensic detail about a decision to sell and how those sales actually happen.

Do you have any podcast favorites you want us to review in a future article?  Let us know in the comments below.

245500cookie-checkPodcasts for Gents: Side Hustle School and Built to Sellyes