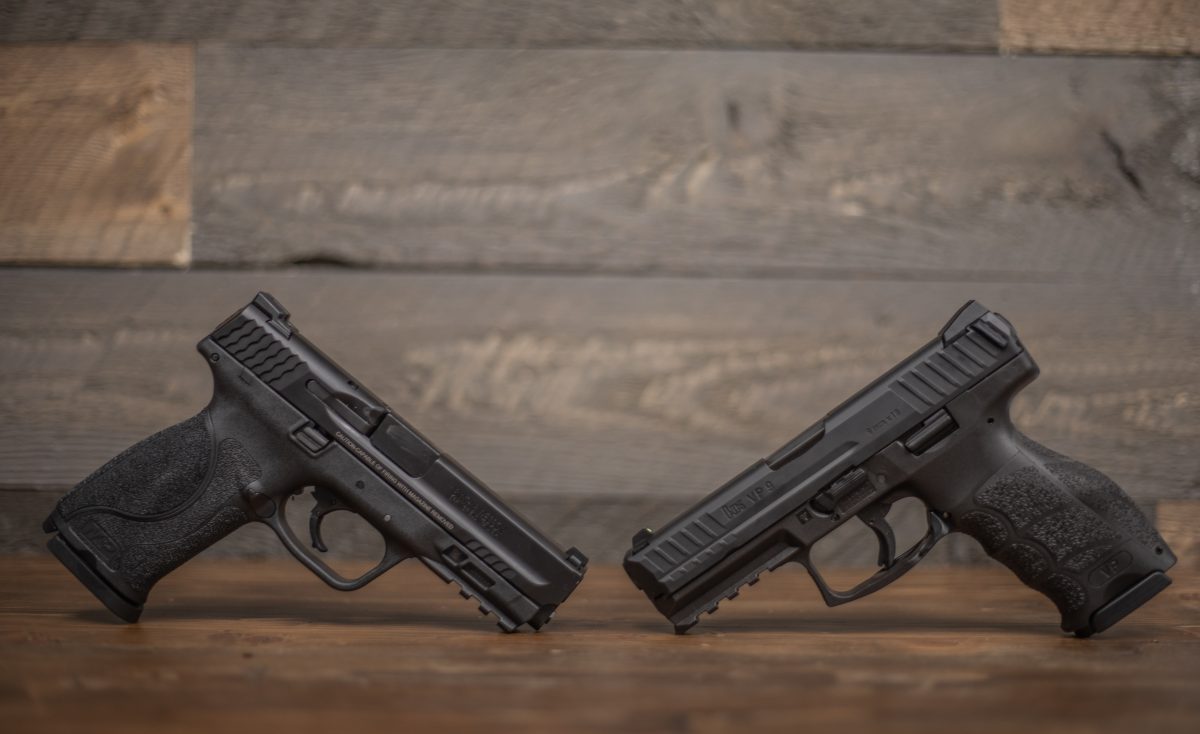 Some time ago we featured an article comparing Glocks and Sigs, in an effort to discuss a more compact firearm.  Some readers were curious about a larger frame pistol, and this article addresses that size of firearm.  It’s a guest piece by Alex Bohl, owner of Trajectory Arms. You can also follow him on social media @trajectoryarms.  Photo of M&P (on the left) and VP9 (on the right) courtesy of Ready Gunner.

One of the more popular choices for large frame pistols is the Smith & Wesson M&P. Based out of Springfield, Massachusetts, Smith & Wesson is a household firearms name that has been building quality handguns for a very long time. Known in particular for their revolvers, they released the striker-fired M&P line of handguns in 2005. Although generally well-respected for its reliability and aesthetics, and accepted for duty use by numerous law enforcement agencies, it had some issues. The particularly crunchy trigger takeup and accuracy issues were a turn-off for many potential customers. In 2017, Smith & Wesson launched the greatly revised M&P 2.0. It features much more aggressive grip texture, improved barrel, and a spruced-up trigger that brought praise from many.

Another well known name in the industry is Heckler & Koch. Starting out as a repair parts supplier for appliances, the company moved into the small arms business in the 1950’s and became the primary supplier of the German Army. They are known for military and police systems such as the G36 rifle, MP5, and the USP line of handguns. In 2014 they released the VP9 pistol, also known as the “VolksPistol” or “People’s Pistol,” obviously designed for the civilian market. A very solid design which some have even stated to be “overbuilt” in some ways, the VP9 brings German heritage in engineering into every aspect of how it feels and operates.

Both pistols come from great heritage, and both should serve you well as a duty or carry pistol. There are some unique differences in each pistol that you should be aware of to help you make a decision, besides price tag alone. The M&P, can be had in the low $400 range when you shop for deals as it is not bound by MAP (minimum advertised pricing) like a Glock would be. The VP9 typically sells in the mid to high $500 range. At such a drastic price difference, can the two guns even be compared?  The short answer: yes.

The M&P 2.0 is a great entry-level pistol with abundant features for the price point. Improvements over the first gen M&P have made the 2.0 a contender with even some higher-end pistols. My favorite feature is the low bore axis that brings the line of the bore closer in line with your hand and allows one to control recoil easier. I’m also really a fan of the new grip texture as an aid in warmer environments where sweaty hands are a possibility. The beavertail was removed in the 2.0 to allow easier carry in the appendix position but is still an option if you are carrying in the kidney position or OWB (outside the waistband) simply by swapping in one of the included backstraps.

Although an aftermarket trigger was a welcome upgrade to the first gen, the 2.0 trigger take up and break are much cleaner in this revision, eliminating the need for an aftermarket upgrade. Overall, with the reliability that the M&P line is known for and the wide aftermarket support, the M&P 2.0 will be a great option for someone looking for an exceptional entry level pistol.

The VP9 however, has much of the refinement that you would expect from a high-end German pistol. For the guy that determines the quality of his tools by how it “speaks” to him, the VP9 is quite eloquent. From the second you pick it up, you can tell some thought has been poured into it. The grip is very comfortable and confident sitting naturally in your hand. The trigger is phenomenal and rivals the Walther PPQ. The take up, break, and reset are all very clean and I have not found a reason personally to search for an aftermarket trigger for it.

One advantage the VP9 has over some of its competition is the forward slide serrations and the charging support tabs. Both allow you to get a positive grip on the slide if you have smaller hands or if you are working malfunctions.

One thing to be aware of on many German made pistols is the magazine release. The German style paddle release is one of those things where you will either love or hate after you try it. If you are a new shooter you might not mind it, however shooters experienced with traditional button type releases may find issue with it.

As far as size goes, the VP9 is somewhere between the full size and the compact M&P. This allows you a 4” barrel and a frame that doesn’t feel compact, but still remains smaller than a full size for concealability.

Whether you decide to go with the M&P or the VP9, you won’t be disappointed. Smith & Wesson packs a lot of features in at the attractive price point of the M&P. HK has gone the extra mile in refining their pistol and if you “get it”, you will love the VP9.

-Fully ambidextrous, mag release must be switched to either right or left

Do you have a favorite between these two, or do you have another similarly-sized pistol that you prefer?  Let us know in the comments below to receive a coupon for 25% off your next purchase of haircare products in one of our clubs.