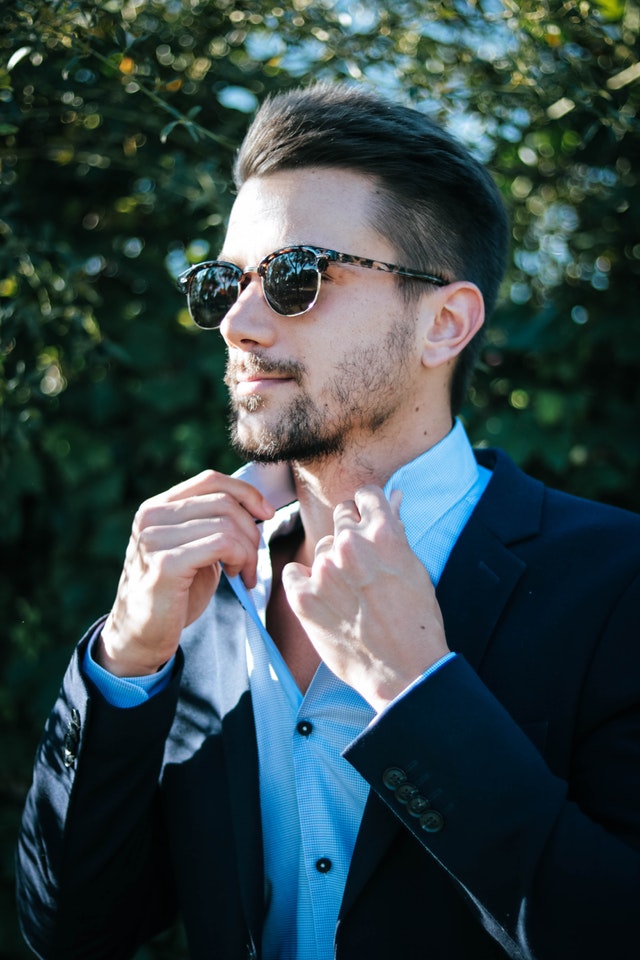 In previous articles, we’ve discussed how to pick frames to fit your face and even given you a list of specific models that were very popular (including the still-in-style Tom Fords worn by 007) at the time. In this article, we’ll talk about different designs of sunglasses and give you a few different representative brands and models for you to look more into yourself.

This 1956 classic was invented by Ray-Ban and is now a classic look that can be worn anywhere, with almost any wardrobe. Ray-Ban has leaned into that popularity by making a foldable model in addition to the custom engraving and different colors you can pick from. All of them run around $150.

Warby Parker had a model with this styling, called the Aldous, but it’s no longer in stock (which means you can find it on some sites like ebay for anywhere between $40-$60). But that also adds a unique piece to your collection.

Another classic from Ray-Ban are their Aviators, though they were actually invented in 1936 by Bausch and Lomb to protect the eyes of pilots while they flew. Bausch and Lomb were surprised by their commercial popularity and used that momentum to create a brand called Ray Ban with the aviators as the flagship model for the brand. They start at around $150.

If you’re looking for 100% American-made aviators (Ray-Ban was acquired many years ago by the biggest player in the eyewear space, Luxxotica) then you’ll be choosing the same brand as Damian Lewis’ Bobby Alexrod character from Billions: Randolph. They run around $220 and come with a lifetime guarantee.

From the Sporting World

Oakleys got their start when the founder started selling special grips at motocross events. They became extremely popular and that same material is used in parts of Oakley glasses (which were designed for motorcyclists originally) to this day. Oakley has also, like most elite brands, been acquired by Luxxotica. They are still considered a standard in the industry, even after their acquisition, with a reputation for customer service that matches their quality. Their Holbrook Iridium Sport Sunglasses retail for around $80.

It can’t be that surprising that Nike and Under Armour have gotten into the eyewear space, if for no other reason than to give one more thing for their sponsored athletes to wear (and to find one more way to compete with each other, recalling the Puma/Adidas battles of old). Both of them have a dizzying array of choices (are they eyewear companies, you might wonder) but they primarily pitch their “performance” eyewear designed to be worn during working out or general exercise. Those performance glasses start at around $85 and go up from there.

Off the Beaten Path

Taking a page from Dollar Shave Club’s viral videos, William Painter has promoted its aerospace-grade titanium sunglasses the same way. They have a lifetime guarantee and come recommended by Tim Ferriss, who is used to putting his products through the wringer. They come with a lifetime warranty and often have promos to get you your first pair at just under $200.

If you want to eliminate bluetooth headphones while wearing your sunglasses, Bose has you covered with their Alto line, which has a more classic sunglass look (they also have Rondo if you prefer a rounder look). Both lines come with, unbelievably, microphone support. They, like the William Painters, start at just under $200.

Seeking practical and inexpensive? There’s Huckberry’s Weekender line, which at $35, is tough to beat.

What sunglasses do you want to rave about? Share them in the comments below.