Introducing My Wife to Firearms 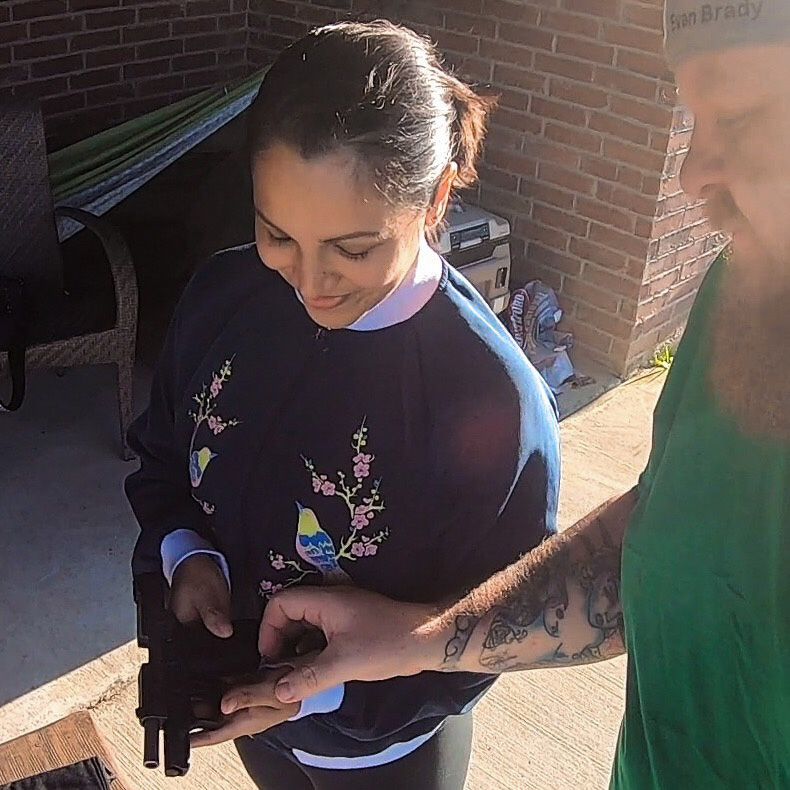 The following is a guest post from Michael Denmon. Michael is a Dad who is working on being a better man, one project at a time. Catch up with his latest attempts at Dad Level Viking.

These words were spoken by my Dad to my wife the first time they ever met.  She had just seen her first squirrel in the wild and was amazed.  I had to translate what my Dad had asked her, pointing to the squirrel for effect, and her face quickly turned sour.  She opted instead to shoot an empty feed sack with my father’s shotgun, leaving with a bruise on her shoulder and a funny video to show her friends back home, with absolutely no further desire to handle a gun.

Growing up in rural southeast Texas, I was raised to hunt and fish and grow things that we would eat.  My gift for my fifth birthday was a single shot bolt action .22 rifle, used to hunt squirrels and rabbits.  My wife, who was born and raised in Peru, was never around guns. Guns gave her a sense of unease, which was understandable.  She was never taught how to handle a firearm, how to respect it, treat it as if it is always loaded.  If you didn’t know these things, guns could be intimidating.

When my wife came to me recently, saying that she wanted to learn how to shoot a pistol, I originally thought “Great!” but then quickly asked what had brought on this decision.  She explained that since we had a son now, she wanted to be able to protect him by any means necessary, should she have to.  While we live in a relatively quiet and safe area, there is always the potential for bad people to do bad things, so I understood her line of thinking.

Firstly, I needed her to become comfortable around a firearm.  I couldn’t teach her in the same way I had learned how to shoot, because she wasn’t after this for the thrill of shooting or for putting food on the table.  She wanted to feel comfortable that she could protect our child and herself in our home, should the need arise.

We started simply, with her holding my empty pistol: I showed her how it functioned while working the slide, the safety, the magazine release.  We discussed trigger discipline and muzzle control, as well as firing stance and how to clear a weapon.  I helped her to realize that a gun is a tool, the same as a hammer or a drill, but with far deadlier potential.  While we should always respect that power that lies dormant, we need not fear handling a firearm if we know how to safely and effectively use it.  After she was comfortable with my unloaded pistol, we went to my Dad’s house, to let her try something more her size.

We followed the same familiarization tactics as we did at home, working our way through several different caliber pistols.  At the end of the day we fired several boxes of shells and had a relaxed, good time.  My wife became much more comfortable and performed what she had been taught without fail.  We have continued to practice her marksmanship, handling and firing several types of pistols now.  While my wife is not quite the staunch advocate that I am when it comes to the rights of responsible gun ownership, she is now at ease with her decision to learn how to protect our son and herself.  I am confident that she can do so, if the need should arise.