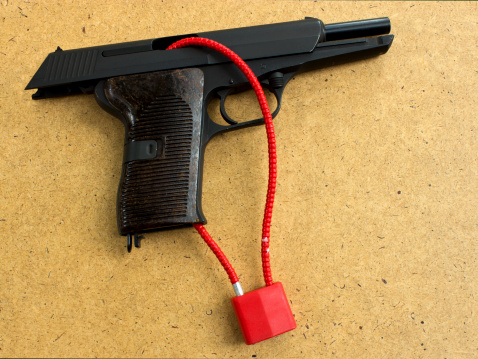 1. All guns are always loaded.

2. Never point a gun at anything you are not willing to destroy.

3. Keep your finger off the trigger until your target is in sight and you have decided to shoot.

4. Be sure of what your target is and what’s behind it.

Memorize these rules. Print them out and tape them to your gun locker. (If you don’t have a gun safe, stop what you’re doing and get one today). Read over the rules frequently. I don’t care how long you’ve been handling guns, these rules must be exercised at all times. Recently, while preparing for a hunting trip, my father, who has been hunting for over 50 years, broke all four rules at the same time. (Multiple times, actually, while at my nephew’s birthday party none the less!) I nearly had a heart attack. My father is a deeply intelligent man (two PhDs

), and he is more experienced with guns than my whole family combined. But since he doesn’t have the time to practice with guns very often, he managed to forget even the most obvious of safety rules.  These are rules that should be in place with any kind of firearm, even an Airsoft (Airsoft Deals is a good place to learn more about these types of guns).  Let’s take a closer look at what these rules are and why they’re so important.

1. All guns are always loaded.

I don’t care how often you check the chamber, how many times you rack the slide, or how sure you are that a gun is unloaded, you always treat it as if it is loaded. You want safety awareness to be second nature. If you’re always switching back and forth between treating the gun with respect and treating it as a harmless tool that is ‘turned off,’ you will automatically slip into a bad practice when the gun is loaded. With a loaded gun, it’s so easy to forget where the barrel is when you’re fiddling with the safety, worrying about a shot, having trouble with the slide, talking, or otherwise preoccupied. If you always treat the gun like the weapon it is, then whenever it’s loaded, your instinct will tell you to secure the gun in a safe way, then deal with whatever issue or problem you may have. Also, guns have a creepy tenancy to become loaded when you are certain they aren’t. This could be due to a round lodged back in the chamber or simply idle, unthinking hands. Since guns are always loaded, the safety should always be engaged until you are ready to shoot. Don’t be lulled into a false sense of security though, the primary safety on any gun is in your head. So even if you cognitively know that a gun is not loaded, you never treat the gun any differently. All rules of gun safety apply at all times. Keep this rule in play while exercising the rest of the rules.

2. Never point a gun at anything you are not willing to destroy.

If you’re not in the act of shooting, the barrel of the gun should be pointed away from any and all objects you’re not willing to shoot. Ideally, this would be down at the ground and away from everyone. Know where the barrel of your gun is at all times. If you’re using a handgun, it’s best to engage the safety and holster the weapon when not shooting. When using a rifle, engage the safety and be aware of Rule 1. There tend to be a lot of things going on at once when you’re at the range or hunting. Guns are not nearly as easy to operate as they seem. It’s very easy to forget where your barrel is. You might turn around, bend down to grab something, or get caught up in any number of things and lose track of where your barrel is. This is unacceptable.

3. Keep your finger off the trigger until your target is in sight and you have decided to shoot.

It’s called Trigger Discipline. I absolutely cringe whenever I see someone handle a gun, pick up a gun, or do anything else with a gun when their finger is on the trigger. Even in movies, it’s just not right. When the cops have their guns drawn on a bad guy, even then their fingers are on the side of the barrel, not the trigger. Your index finger should point straight out and rest on the side of the slide, not on the trigger. This is equally true when handling an ‘unloaded’ gun as when protecting yourself from an attacker. Raise the gun to eye level, do not drop your head down to meet the sights of the gun, and acquire your target. Once you have determined that there is nothing behind your target that you aren’t willing to destroy (we’ll get to that in a minute) you can release the safety and fire.

4. Be aware of what your target is and what’s behind it.

The most tragic cases of not knowing your target are usually hunting accidents. Eager hunters will see movement and fire. This should be, and often is, criminal. To fire a weapon at something you haven’t visually identified, clearly and accurately, is taking a massive risk with no reward. Even the police are susceptible to this, killing innocent civilians in no-knock raids. Don’t let adrenaline or expectation dictate when you shoot. Subtler still is what’s behind what you’re shooting. You can’t shoot a deer if your friend is in a bush behind it. What’s the point of shooting a home invader if he’s standing in front of your wife? You may see it in movies, but never make this mistake. Move. Move yourself until you have an angle from which it’s safe to shoot.

Memorize and exercise these rules at all times and you can advance to more and more complicated training. But no matter how good you get or how much training you receive, you must never break any of these rules. Not even once.